Retroactive pay, or retro pay, is the money you owe an employee for work performed during a previous pay period. Here’s how to make a retro adjustment.

It’s easy to think of payroll as a simple task — you pay your employees for the work they perform and the time they put in.

But the payroll process gets complex quickly, enough to require a payroll professional to navigate the constantly changing legislation and requirements on a regular basis. There are so many moving pieces that are necessary in paying a staff on time and in full.

What happens, though, when that payment is incorrect?

This results in a common process called retroactive pay (or “retro pay”). Payroll mistakes are rarely intentional, but mistakes can still happen throughout the payroll process. Business owners are often stretched thin, covering a wide range of other responsibilities. It’s entirely possible that they may run into a scenario where retroactive pay is necessary.

What Is Retro Pay?

Retroactive pay makes up for the difference between the amount an employee was paid and the amount they were owed during that time. This most often occurs when there is a change in an employee’s salary or pay rate which goes into effect in the middle of a pay period. It is often paid as a separate payment or added to the next paycheck once the discrepancy is discovered.

This is different from back pay, which sounds similar but is another process that is often discussed. Back pay means paying an employee their owed wages that were not ever paid. That is less common than retro pay, which is simply fixing a difference between what was paid and what was supposed to be paid. 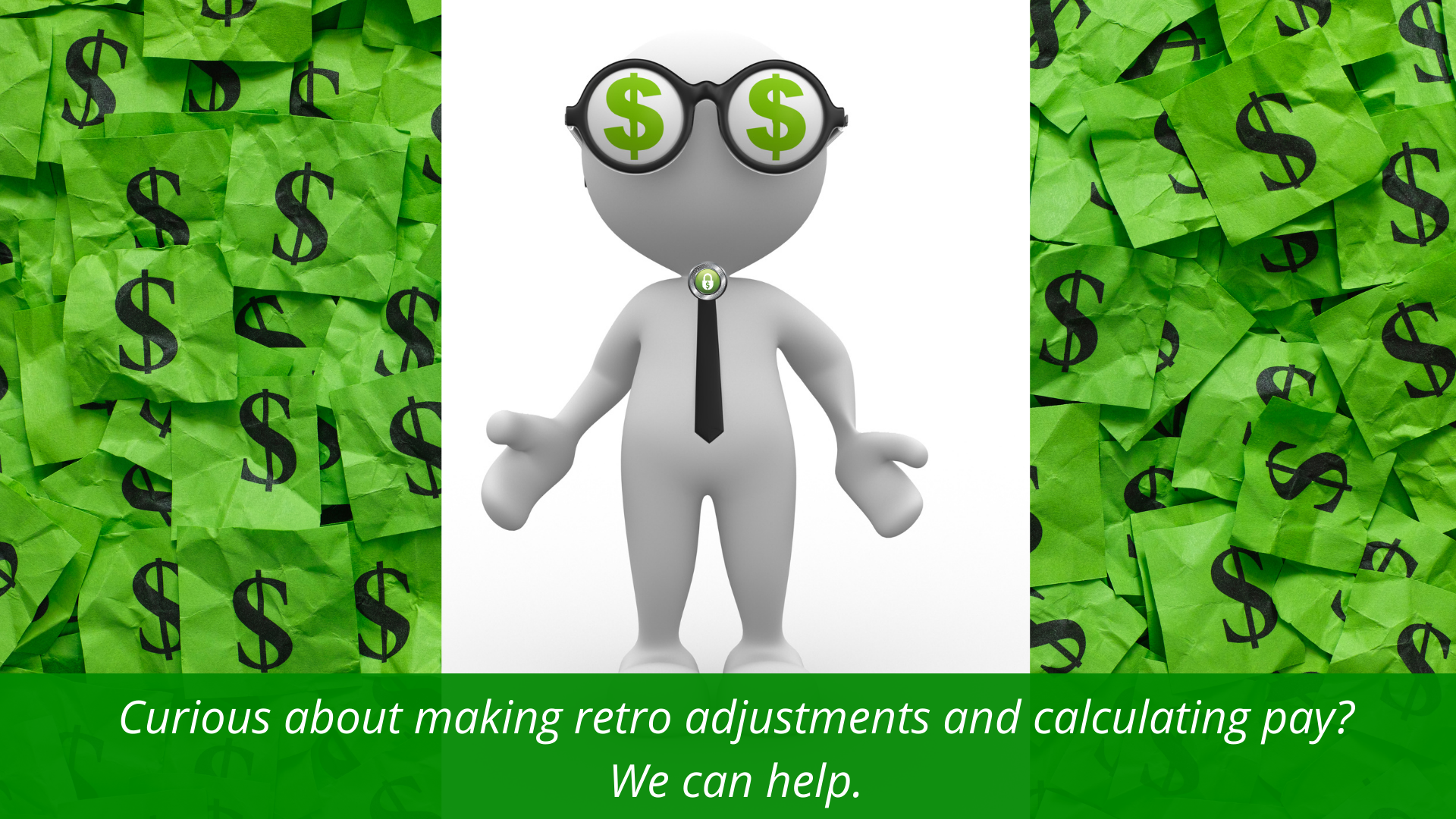 How to Calculate Retro Pay

As with any payroll process, calculations depend on several factors, though these are often fairly simple to determine.

Most importantly, you will need to verify the period of time there was a payment discrepancy along with the type of pay (hourly or salaried). Keep in mind, there are several legal guidelines dictating pay periods that could affect your calculations in certain situations.

Let’s work out a couple of examples — one for an hourly employee and one for a salaried employee.

Let’s say your hourly employee has a good performance review and earns a pay raise from $22 per hour to $25 per hour. The raise takes effect on the first of the month, which happens to fall four days before the end of a pay period.

First, you calculate the difference in hourly rate, which in this example is three dollars per hour. Then, you calculate how many hours were incorrectly paid at the old rate. If the raise took effect with four days to go in the pay period, that means four days of pay (using eight hours per day based on a 40-hour workweek) need to be accounted for in the retro adjustment.

In this example, the employee would be owed $96 in gross retro pay.

Though the process of calculating retroactive pay for salaried employees is similar, there is an extra step. Here, you need to factor in the pay periods. Are they semimonthly, such as the 15th and 30th of each month, or simply every two weeks?

Let’s assume for this example: a salaried employee reaches a work anniversary that is accompanied by an agreed-upon raise, bringing their annual salary from $60,000 to $65,000. This company pays on a semimonthly basis, meaning there are 24 pay periods in each year. The raise took effect at the start of the month but will not be reflected in paychecks until the second pay period of the month, meaning a full pay period should be accounted for in retro pay.

Only one pay period needed to be remedied in this example, so the employee would be owed $208.33 in gross retro pay.

Of course, these examples are purely hypothetical and simplified to explain the process. There are a variety of reasons for retro adjustments to be made, including bonuses that need to be paid out, and several correlating methods of calculating the pay that is due. There are also tax implications that need to be factored into these payments, as wages are still subject to any necessary payroll taxes.

Navigating the retro pay process represents another complexity that leads many business owners to seek outsourced payroll and workforce management expertise. From calculating and executing retro pay to providing a new employee orientation checklist to simplify your onboarding process, contact your local payroll pros at Payroll Vault. That way, you can focus on the business operations that truly fill your passion.

January 26, 2023 Filing Small Business Taxes for the First Time: What to Know

January 20, 2023 Payroll Solutions: A Complete Guide to Hiring Help for Your Small Business

December 27, 2022 Switching Payroll Providers: What to Know When It's Time for Them to Go

November 22, 2022 Payroll Budget: What to Know When Planning for Employee Pay

Do you want to get notifications from this site?